This page is devoted specifically to the collapse of building 7 ( WTC 7), also called Salomon Brothers building. The collapse of this building was an astonishing event in the history of modern architecture and structural engineering because never before had a tall steel framed building collapsed due to fire, though many have burned fiercely. That it happened suggested to some initial TV commentators, for example Dan Rather, that explosives may have been used in a controlled demolition, but the media reported little about this building and did not provide any discussion of this possibility. The improbability of the collapse being due to fire became lost in the general turmoil that the tragic events of 9/11 created. Even now, few people are aware that a third building came down that day.

FEMA released its report World Trade Center Building Performance Study in May, 2002. This provides a description of the building and suggests several hypotheses for the mechanism of collapse, assumed to be due to fire. It is a surprise to read in this report that “…the best hypothesis [fire] has only a low probability of occurrence. Further research, investigation, and analyses are needed to resolve this issue.”

One would think therefore that when NIST came to perform further investigations they would have widened the scope of their enquiries to include the possibility that explosives were used. They did not. This has to be regarded as a particularly suspicious aspect of the NIST investigation, as the collapse has all the signs of an expertly performed controlled demolition: sudden onset, acceleration close to free fall, symmetry and totality.

There are also convincing reports that explosions were heard and felt. The testimony of Barry Jennings, who was trapped for some time in WTC 7, after an explosion damaged a staircase, is particularly revealing. Unfortunately Barry cannot be interviewed further as he recently died, close to the time when the BBC was presenting a study of the collapse of WTC 7.

NIST apparently was not able to find a sufficiently plausible explanation for the collapse until 2008. In the NIST final report their earlier suggestion that the collapse was due to damage from falling debris and severe fire on the south side was abandoned. They had been saying that fire weakened the steel columns and had no option but to say the fire was severe on the south side because we have videos and photographs which show there was little fire on the north side. It is not surprising that NIST eventually abandoned this idea as, on its face, it was ludicrous. For example in Controlled Demolition at the WTC we read “It is inescapable that if one side of a tall steel structure is heated to the point of failure, while the other side is not, the structure must lean toward the heated side. WTC 7 did not lean however, it just came straight down…”

To replace their south side fire-damage theory, NIST devised a theory where the damage initiated more centrally and depended on “thermal expansion”. This was supposed to have caused the severing of attachments of a section of a floor on the east side to a critical support column, starting a domino effect on several floors, finally exposing sufficient of this column to allow it to buckle. This was a more complicated theory and I suppose they hoped we would not be able to see through it. Numerous authors have, however, found this explanation to be equally implausible, as may be found on the Papers page, for example The NIST WTC 7 Report: Bush Science reaches its Peak by Kevin Ryan. The explanation fails at the outset as this column should still have had support from floors running to the west and south which would prevent buckling. Already we have noted a piece of evidence which strongly indicates the official story may be false.

What really does happen when a tall steel framed building burns?

There have been many examples of fires in tall buildings. In some cases a portion of the building may collapse. If it does, this will be spread out over a period of hours, not minutes and certainly not a few seconds, as happened with all three buildings at the WTC. It is very difficult and often impossible to properly direct water into a tall building and in most cases the fires eventually just burn out. Two types of tall building may be distinguished: steel frame and steel reinforced concrete. In the latter case the heat may cause the concrete to crack and eventually fall away, in which case the relatively thin reinforcing steel may collapse where it is exposed. True steel framed tall buildings, such as the WTC buildings, apparently never collapse due to fire, yet on this day three did collapse. 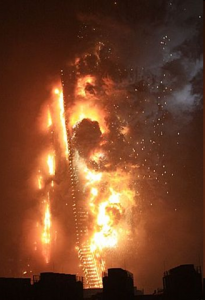 A striking example of a steel framed building burning was provided in Beijing recently (February 2009).

The TVCC building was ignited by fireworks and the fire quickly spread throughout its entire height, as can be seen in this video. Apparently the building was designed in such a way that an updraft could develop. The contrast with the WTC buildings in this respect was extreme. In WTC 7 we see that several fires spread horizontally for some distance, and eventually most burned out, but there is no clear evidence of any vertical spread. 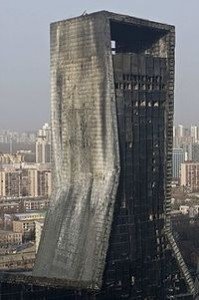 After the fire burned itself out the frame remained standing, the structure quite entire. Though the fire was vastly hotter than the fire in WTC 7 the building did not collapse. An eye witness gives a clue to the temperature of the steel:

“The building was like an oven, red inside,” Hu Jing, a 26-year-old paralegal and witness to the disaster, told the Washington Post.


To make the contrast clear I will show a similar pair of photos of WTC 7. First, here is the video. 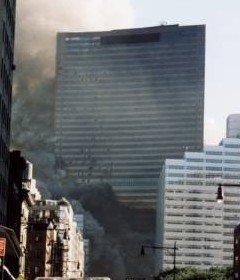 During the fire, at the moment when the collapse has just begun, we are hard pressed to find any fire. Apparently most of the fires reported earlier in the day have burned out. Remembering that steel regains strength as it cools, this building should now not be able to collapse at all, let alone straight down. If there is severe fire on the far side, the building should have leaned away, but it did not. 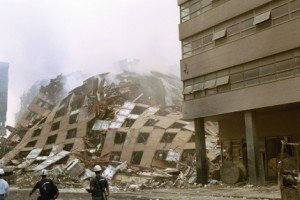 After the collapse, which took about 6.5 seconds, we find the building is neatly stacked in a small area, hardly bigger than its footprint. As there were valuable buildings each side this is a remarkable achievement and the perpetrators are clearly highly skilled to be able to minimize the damage to neighbouring real estate. To place the collapse time into perspective we note that the roof would have reached the ground in 6 seconds in free fall in a vacuum.

It is now acknowledged by NIST that the building fell for 2.25 seconds at the free fall rate of acceleration, 32.2 feet per second per second. This is proof that there was no structural support whatsoever during this period in which the roof dropped about 100 feet. NIST describes the collapse as “progressive” on the basis of their computer model. A collapse cannot be both “free fall” and “progressive”, thus NIST contradicts itself. Again we note the official explanation is proved false by scientific study of physical evidence.

David Ray Griffin has recently published an incisive short paper in which he investigates the concept of the SCAD in relation to WTC 7. This concept, State Crime Against Democracy, was reported in the February issue of the American Behavioral Scientist.