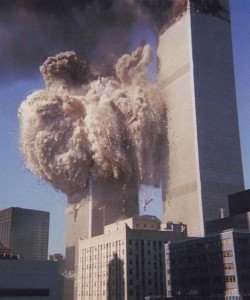 A frequent argument against the explosive demolition theory, as applied to the collapses of the Twin Towers, is that they do not look like conventional controlled demolitions, being carried out from the top down. This is true – normal demolitions are carried out from the bottom up. This argument carries no weight, however, as there is no reason why a demolition must be done that way. It is, after all, only a question of where the explosives are laid and the order in which they are detonated.

Bottom-up demolition is preferred, where possible, because much less explosive is required, as the mass of the falling building provides energy which assists the demolition. Obviously the towers had to be brought down from the top to create the illusion that it was caused by plane damage and fire.

There is however another interesting point. These towers were about three times the height of any building which had ever been demolished in the past. They were also very slender. Any attempt to drop them from the bottom would have run an extremely high risk that they would not fall straight down but would topple over. This would have had a devastating effect on the neighboring real estate and would have caused many more deaths.

One has to ask why bin Laden or al Qaeda would have worried about New York real estate and death rates. It is reasonable to believe that external terrorists would have had three concerns:

These concerns would have been best dealt with by using a small amount of explosive on one side of the towers, near the ground, so as to deliberately topple them, as one chops down a tree. Above all, the terrorists would have wanted to avoid detection. Imagine how difficult it would be for an outsider to install explosives all the way up these well secured buildings without detection. In contrast we note that it might not have been a very difficult task for an insider, as Marvin Bush, brother of George Bush, had earlier been a director of Securacom, the company in charge of security. 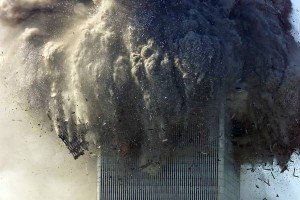 There are many lines of evidence for controlled demolition of the towers using explosives. The most glaringly obvious is the quantity of material thrown out from the towers as they fall and the violence of the ejection. Heavier objects lead the way and drag dust behind them in a curved path. The rate the dust falls is an indication of its density as will be discussed later.

The simplest hard scientific evidence for the use of explosives is found in the study of the rate of collapse. It is not quite as simple as in the case of WTC 7, where the average rate of collapse was at free fall, as close as could be measured, that it is immediately clear that the only possible explanation is controlled demolition. In the case of the twin towers the collapse rate is a little slower so it is necessary to see whether any process other than controlled demolition is feasible.

An examination of the forces exerted in the collapsing building provides the answer. When a force is exerted on an object which is free to move, it will accelerate. Our everyday experience teaches us that the rate of acceleration is proportional to the force applied. It follows that if we can measure the acceleration we can calculate the force.

This has been set out very clearly by David Chandler. He is a high school teacher and has the knack of explaining serious physical concepts in a very efficient manner. He shows that the acceleration of the roof of WTC 1 is constant right from the start and is 64% of the acceleration due to gravity. This means that the upward force restraining the fall must be 36% of the force due to gravity.

Now comes the essential clue to this debate. According to Newton’s third law, for every force there must be an equal and opposite force. This means that the falling top of the building must be exerting a force on the lower portion of exactly the same size, 36% of the force due to gravity, or 36% of its weight.

The building was designed with a substantial safety margin. At any point in its height, it was capable of supporting several times the weight of the portion above, yet here we see the lower portion failing, even though the force on it is only a small fraction of the weight of the portion above. This lower portion was not damaged by plane impact and not affected by heat, yet it is only resisting with a force of about a tenth of its design strength. Only explosives can account for this incredible loss of strength.

David Chandler’s explanation of this is summarized here.

Having deduced, by a scientific studyof the video evidence, that explosives were used in a top down sequence, it becomes apparent that the rate of collapse would have been under the control of the perpetrators by timing the sequence. It seems likely that the rate was chosen to be substantially lower than free fall in order to have the debris falling a little ahead of the collapse front, thus obscuring the dust puffs from the explosives. This was successful with WTC 1 except at the very top, as shown in the photos and videos. In the case of WTC 2 it was not so effective and at least three rows of dust puffs can be discerned in this video before the expanding dust cloud totally obscures the area.

Jim Hoffman has studied this collapse carefully and shows that the explosion bursts are occurring on every fourth floor. This is clearly shown in frame 147 in this set. We cannot tell whether the same spacing was used further down where the dust blocks the view. 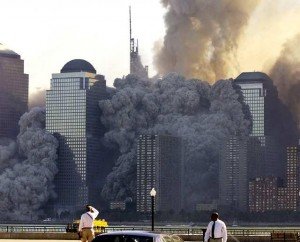 The “spire” stands for a few seconds in clear air.

Shortly after the main collapse an extraordinary event occurred. The dust that was generated by the collapse proved to be so dense that it fell vertically within a few seconds. This appears to confirm that this is not ordinary dust but is the location of most of the concrete. We can see the sky clearly over the base of the building. This heavy dust, falling rapidly, provided the energy to hurl the dust outward in the great rolling clouds that are now so well known.

We also see that the collapse is not complete. A portion of the core remains standing, often called the “spire”. It is not merely balancing there, as videos show that it sways back and forth, indicating that it is attached at its base. Maximum stress at the base would exist at the extreme positions of the sway. Having survived the countless impacts of the collapse, and also the sway, one would think that it would stand permanently, but it does not. 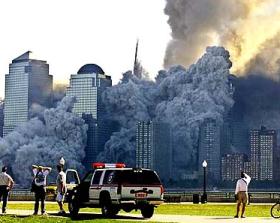 The “spire” starts to move down vertically.

Moments later the steel starts to fall vertically. This indicates that the steel had been cut through at a point well above the ground. As the steelwork is no longer falling around it there is no reason why this should happen, so this final stage of the collapse cannot be attributed to impact from material falling from above, as in the official theory. It appears that an explosive charge must have gone off rather later than intended.

Once again we see that the official explanation for the collapse is proved false by scientific examination of the recorded evidence.