Robin Hordon submitted a paper to be considered for publication in the Journal of 9/11 Studies. If that had been all he had done the submission would have been treated in the usual way. It would have been considered first by the editors and, if thought valuable and appropriate in subject matter for the journal, it would have been submitted for review by peers. Numerous suggestions for corrections and improvements usually arise from this process. When the editors are satisfied that the author has properly dealt with the reviewers’ comments the paper is published. Unfortunately Robin chose to publish the paper himself via the internet at the same time. As his paper attacked the paper by Warren Stutt and myself it became necessary for us to defend our work immediately, lest those who received his work by email thought it was the last word on the issues he raised.

The first issue about the post by Robin is that he assumes that Warren and I are claiming that the decoded Flight Data Recorder (FDR) file provides proof that flight AA77 hit the Pentagon. If he had taken the trouble to read the footnotes he would have seen that we specifically say that there is no proof that the file is authentic, and that it is impossible to prove that it is authentic. All we assert is that the FDR file provides one more piece of evidence to add to the very many other pieces of evidence that indicate a large commercial plane hit the light poles and then the Pentagon, as reported by the vast majority of witnesses. We also point out that the file provides proof that those who say the file shows the plane could not have hit the Pentagon are wrong: the radio height clearly shows the plane descending smoothly, pulling up safely and hitting the Pentagon near the ground, as indicated by the long straight damage trail, both outside and inside the Pentagon.

Dealing with Robin’s points in order, he first states that there appear to be discrepancies in the time line. It is a reasonable proposition that a major strategy used by the perpetrators of the Pentagon attack was to provide confusing, contradictory evidence, and thus cause good people seeking the truth to argue against one another. If one accepts this, then all strange pieces of evidence, like the reported extraction of data from the file at a time before it was reportedly discovered, become just part of the evidence that this was a cunningly conceived, complex inside job, designed to confuse and deceive. Likewise the lack of serial numbers is not proof that the file is not authentic, but likely just one of the many denials of 9/11 information; a deliberate tactic to raise doubts. In his second submission Robin now agrees with this view, saying he is in “basic agreement that the timelines and other pieces of information may indeed be ‘red herrings'”.

Robin’s second point is his claim that the report of the plane commencing descent at 08:54:43 is contradicted by the FDR and that, at least from that moment, the file cannot be relied upon. Unfortunately it appears that Robin has misread the reference. It does not state that the plane commenced descent at the above time, but that it then commenced its turn. It goes on to state “Shortly after the turn the aircraft was observed descending.” If you examine the data you will see that the turn finishes at about 9:00 and descent commences at about 9:02. A gap of 2 minutes would correspond pretty well with “shortly after the turn”. See graph below. 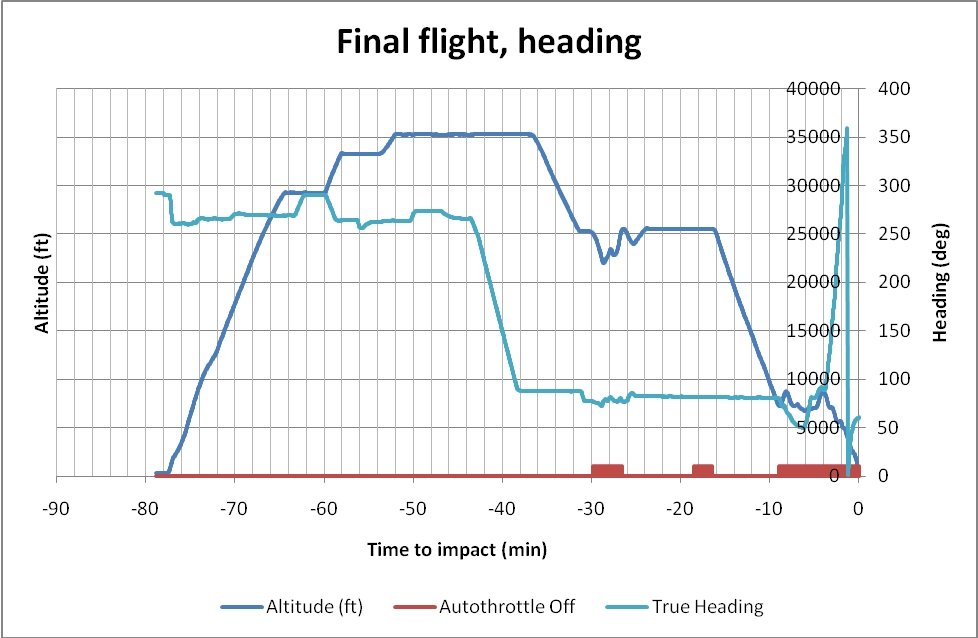 Radar coverage is continuous from Dulles to the Sheraton Hotel

Finally Robin draws attention to the discrepancy between the final bank angle recorded in the file, zero degrees, and the bank angle observed at impact. We discuss this in the paper and point out that, prior to impact, the control wheel was near central, so this sudden left bank was not commanded, whether by human or on-board control device. The only conclusion that appears reasonable is that the plane was rotated left by impact of the right engine with the heavy generator trailer which had been parked in front of the Pentagon. This rotation may have been too rapid to be correctly recorded. Robin rejects this explanation on the grounds that there was not enough time for the impact to cause this rotation. However it may not have been caused simply by impact. The generator was not only heavy but was also very strong, with a steel framework. The engine was also attached strongly to the wing. The impact was high on the generator and might have caused it to start to roll over. The diagonal is longer than the height thus the generator would have exerted a severe upward push, lasting longer then “impact”. Whatever the cause of the rotation, there is no doubt it occurred, as shown by the damage on the Pentagon wall. There is also the possibility that the collision with the generator was violent enough to bend or sever the right wing, in which case much less energy would be required to raise the right wing up to the observed line of damage on the wall.

We have to remember that all good propaganda is largely true. I estimate that about 95% of the NIST report on the collapse of the Twin Towers is true but we have found proof that its essence is false. To reject the official account of the path of AA77 we have to find proof that it is false. So far no such proof has been found and no proof has been found that the FDR file is false. It is not enough to say there was a radar black hole and the plane may have gone somewhere else and been replaced by another; one has to find proof. There is no sign of another plane in the radar data.

Even after examining Robin’s second submission and further comments it appears than none of the issues raised by him carries any weight.