Most people presenting evidence about 9/11 start by showing the collapse of building 7 (WTC 7). They start with this building because it is obvious that its collapse looks exactly like a controlled demolition. We will come to WTC 7 later, but first we will examine the National Institute of Standards and Technology (NIST) report on the collapse of the north tower, WTC 1. If it can be shown that the NIST report cannot be relied upon, it will make it easier to look seriously at the evidence for alternative explanations for the collapses.

[Before proceeding, note that there is a preamble to the Introduction which you may have missed, as it is not very obvious in the menu. Click on the Case button itself to find it.]

Propositions rest on a foundation. If the foundation is unsound the integrity of the structure based upon it will be suspect. What do we find when we study the NIST report?

Most people are unaware of the extraordinary fact that the NIST report on the Twin Towers does not cover their actual collapse, even though that is the task NIST was charged to perform. The report goes into great detail about the plane impacts and fires but stops short at the point where it claims the towers were “poised for collapse”. For the collapse itself NIST relies on a paper by Bazant and Xhou. This was adopted as the foundation of the NIST report. The paper was submitted for publication only two days after 9/11, which is astonishingly fast for a scientific paper and hence extremely suspicious. Similarly we note that the very large Patriot act was presented to the US congress very soon after 9/11 and the invasion of Afghanistan also commenced with such alacrity that one suspects the plans had already been drawn up and materials put in place.

The paper by Bazant and Xhou, Why did the World Trade Center Collapse? – Simple Analysis, purports to be a scientific explanation of the collapse of the towers. It has been updated since its original publication but the essence of their explanation remains the same, as follows:

Only in stage 3 of this list has NIST introduced anything of its own. NIST claims that sagging of the floor trusses pulled the outer columns inward and thus started the buckling of the columns. They attempted to validate this theory by subjecting floor trusses to furnace tests run by Underwriters Laboratories. Unfortunately for NIST these tests showed that the trusses would not have sagged sufficiently to have had this effect. This theory can also be disproved by examination of the videos, which show that the antenna on the roof dropped before the edges of the roof. As the antenna was directly supported by the core columns, this proved that the core columns failed before the wall columns. It also proves that the hat truss, which connected the core to the wall columns, was severed at the outset, impossible as an effect of fire.

Figure 1 in the paper by Bazant and Zhou, linked above, illustrates their concept of the collapse process very well. We see the top block falling through the weakened section, then continuing to fall, destroying the lower portion of the building. In particular, notice stage 5 of their collapse where the diagram shows that the top block has retained its size and shape undamaged as it plows through the lower portion. It seems plausible enough and the complexity of the paper, despite its name, suggests that each step has been proved feasible.

Before we go on to study the videos, let us consider some practical and theoretical aspects of the hypothesis set out above and devise some questions to ask.

NIST examined samples of steel, including samples which were taken from the fire damaged area. They found only about 2% had experienced temperatures above 250 deg C. At this temperature collapse initiation would have been impossible as the steel would have had nearly all its original strength, and the buildings were designed with ample safety margins.

Clearly NIST has failed in two of its objectives. It has failed to find forensic evidence of the necessary high temperatures in the steel, and it has failed to find, by model testing, that an essential component of their theory, sagging floor trusses, was valid. Careful study of the motion of the roof of WTC 1 shows that it commenced its downward acceleration with no apparent initial slow movement, as has been shown by several authors, for example David Chandler. The acceleration was uniform at least until hidden by dust. There was no initial slow sagging.

Let us now look at the way the building behaved. 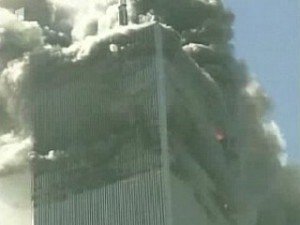 WTC 1, just prior to collapse

First we will look at some stills. Here is the building just prior to collapse. Notice that there is much smoke streaming through windows but no evidence of intense fire. If the columns were at 800 deg C, as claimed, they would be bright red-hot, but they are not.

Copious smoke indicates oxygen-starved fires, which would be burning at the low end of the temperature range for fuel fires. Updrafts improve the oxygen supply and raise the temperature of a fire, but the gentle sideways drift of the smoke shows that no updraft has developed, which in turn indicates that the floors are still intact. When designing buildings, architects avoid openings in floors specifically to prevent updrafts if fire occurs. The design here appears to have been successful. 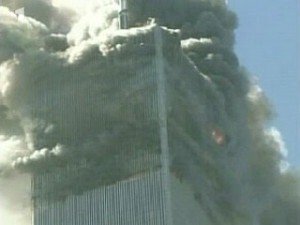 At 1 second into the collapse.

One second later the roof has dropped a short distance and we can clearly see a horizontal line of whitish dust projecting from the building on both visible faces. The sudden acceleration and the symmetry are indications that the columns have been simultaneously severed, and the line of dust suggests that explosives are the cause. 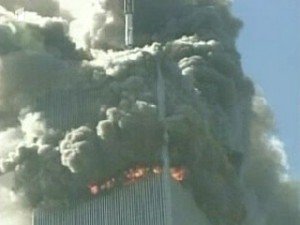 At 2 seconds into the collapse.

In the next frame we begin to see that the top block is shrinking. Somewhere within its height it is giving way. Recalling that the top was supposed to be falling as a rigid block, acting as a hammer on the lower section, this is a surprise.

In the following frame, at 2.6 seconds, the last frame in which we can properly discern the lower portion, we see that it has not yet moved and the top block is about half its original height. 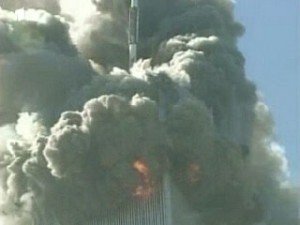 It is clear that the top block, far from being a rigid hammer, is disintegrating and cannot possibly provide the impact which Bazant and Zhou have calculated and depended on. There is now a mass of fragmented material falling, which can deliver many very small blows but we can predict that it will be unable to deliver a blow representing its total mass, as the official story requires.

This prediction is proved to be true. If the top block were to deliver destructive energy through impact to the lower portion of the building, the energy consumed would result in a reduction in its acceleration. No such reduction can be detected, as shown in the paper by MacQeen and Szamboti, The Missing Jolt.

We can now summarize the answers to our questions.

All four of our questions have been answered in ways which show the official explanation of collapse to be false. One such answer would have been sufficient.

The only reasonable conclusion is that the collapse was initiated in the top block by explosives and that the destruction of the lower portion of the building was started a little later, also by explosives, so that it would fall away and allow the debris from the fragmenting top portion to continue its downward acceleration.

The collapse was unusual in that it was conducted from the top down, and thus conveyed the impression that it was caused by plane damage and fire. This is discussed in the Twin Towers page.

It is clear that the foundation of the NIST report, the Bazant and Xhou theory, is false. Even with the attempted embellishment of sagging floors, it is still false. We can now see why the NIST authors did not carry their simulation right through the collapse. If they had done so honestly they would have demonstrated that collapse was impossible.

Others have demonstrated that collapse would not have occurred even if the steel in the plane and fire damaged region did suddenly fail. The first to do so was Gordon Ross in his paper Momentum Transfer Analysis of the Upper Storeys of WTC 1.

Another way to show the Bazant explanation of collapse to be false is to consider Newton’s third law, which states that the forces between two contacting objects will be equal and opposite. If we allow Bazant’s fanciful pile-driver concept to be correct up to the point where the falling top section strikes the lower stationery section of the building, we immediately see that the impact will be felt equally by the upper and lower portions. If the first impact is sufficient to destroy the upper storey of the lower section it must also destroy the lower storey of the upper section. The upper section will now have one less storey. At each subsequent impact the top section will lose another storey and become lighter and the thickness of the debris between the sections will become greater, increasing the cushioning effect. The collapse must stall. The collapse however continued, the roof accelerating downward smoothly. This is not possible unless the supports in the lower section are progressively severed.

It is interesting that Bazant makes no mention of Newton’s third law in the paper linked above. He received criticism for this paper and responded, creating some interesting discussion, described in the page titled “Notes on Bazant.”

Having seen that the NIST report is false, the time is right to examine evidence for the alternative explanation that explosives were used in controlled demolitions. Check the pages titled WTC 7 and Twin Towers.

There is also a large number of papers which investigate features of the collapses. The page titled Papers lists many of these. Two of these papers deal with the other source of evidence which is in public hands: the dust samples which a number of people collected.

If anyone reading this has retained a sample of this dust please let the author know. It is very valuable as it could provide other researchers with the opportunity to independently confirm the findings.