The new decoding of the Flight Data Recorder (FDR), done by Warren Stutt, shows that there were 4 more seconds of data at the end of the file, previously not decoded. He thus confirms the work of John Farmer, who used radar records to show that several seconds of data had to be missing from the version of the FDR file initially available. More recently (2009) John has provided details of the process he went through to establish the time of impact from radar data in his “Time Normalization” paper.

Warren managed to decode the last section of the FDR file and we now see that the data describes a plane descending smoothly, pulling up safely and hitting the Pentagon near the ground, as so many eyewitnesses have reported. The impact time from the FDR agrees with the radar data to within 3 seconds.

Here is a convenient summary of some findings pertaining to the flight and its last moments. It includes the entire testimony of Penny Elgas who watched the impact and reported that a piece of the plane fell into her car, probably though the open sunroof.

The track set out in the FDR file corresponds closely with the track derived from the radar data. Radar cannot give accurate information near the ground and the FDR file previously had data missing from the end, hence there was a narrow window of opportunity for controversy. 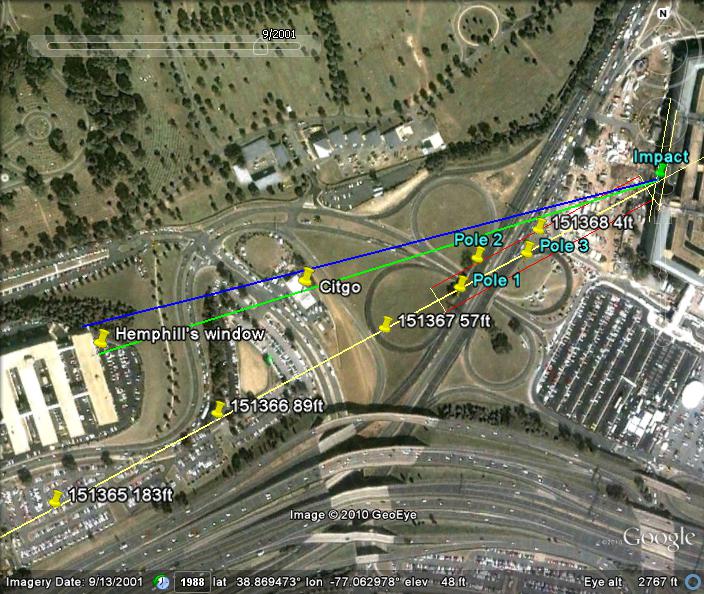 Flight path as shown by the FDR and the damage trail

Above is an image of the area from the Navy Annex to the Pentagon. The yellow line is the track established by the trail of damage through the light poles and inside the Pentagon, the angle of which is confirmed by the FDR file and the radar tracks from four separate facilities. This is set out in a peer reviewd paper at the Journal of 9/11 Studies, AA77 on 9/11: New FDR Analysis.

The green line is the line of sight of Albert Hemphill from his vantage point high in the Navy Annex to the impact point on the Pentagon. You can see that the line passes over the Citgo service station. Hemphill repeatedly asserted in interviews and in statements that the plane passed over his right shoulder and dived straight over the bridge (the overpass of VA27 across Columbia Pike) hitting a light pole, and impacting the Pentagon. “It didn’t pull up, it didn’t turn right, it didn’t turn left. It went right into the Pentagon”. If it didn’t turn, it went straight. That is a pretty indisputable concept, yet some dispute it. Clearly his view of the plane at impact passed over Citgo but the plane did not.

Here is something from an interviewer who disputes Hemphill’s straight path claim:

It is obvious that Hemphill’s testimony supports a track south of the service station. He was interviewed years later and persuaded that the plane went over, or a little to the north of the service station. Clearly he would not have made this mistake had he been looking out of the window of his office when interviewed. Had the plane passed to the north of the service station he would have said it passed over his left shoulder. The fact that others have claimed, on the basis of this single contradictory remark, years later, when not in his original position, that Hemphill is a north path witness, tells us nothing about the path of the plane but does tell us that we should be wary of these so-called interviewers. We should examine their methods carefully, looking for cherry-picking and suppression of contrary evidence. The blue line shows where the plane would have flown if it passed north of the Citgo service station in a straight line.

Hemphill is the only eyewitness I am aware of who was located precisely behind the Citgo station and hence in the perfect position to notice whether the plane passed to the north or the south of it. I can find no reason to doubt his testimony where he speaks of “right shoulder”, and suggests the plane passed near the VDOT tower and travelled in a straight line.

Terry Morin is another person claimed as a north path witness by CIT. He was about half way along the south side of the Navy Annex and came out from between the wings as the plane passed overhead. He followed it as it continued on toward the Pentagon.

“As the aircraft approached the Pentagon, I saw a minor flash (later found out that the aircraft had sheared off a portion of a highway light pole down on Hwy 110). As the aircraft flew ever lower I started to lose sight of the actual airframe as a row of trees to the Northeast of the FOB blocked my view. I could now only see the tail of the aircraft.”

If you examine the image above you will see that only if the plane travelled straight would Terry have been able to follow it till it went behind trees. Had the plane veered north of Citgo it would have gone out of sight, hidden behind the Navy Annex. It is clear that Terry is a south path witness and that to claim him as a north path witness is false. As CIT knew exactly where Terry was standing at the time it appears this claim is not merely incorrect but intentionally deceptive.

One of the interesting things to come from the FDR file is the behaviour of the engines in the final few seconds before impact. Many eyewitnesses reported that the plane was at “full throttle” and “spooling up”. The plane had been flying somewhat erratically but had not exceeded normal cruise speed on approach. In fact the FDR file shows the throttle setting had been reduced on the final descent, apparently to avoid excessive speed. The graph below shows the throttles (thrust levers) were set to full power about half a minute before impact. To avoid having too many lines on the graph the left and right engines parameters were averaged.

As the levers are pushed fully forward we see the fuel flow increasing and the plane accelerating. The EPR value is a measure of engine thrust. It is clear that within a couple of seconds the thrust limit has been reached and thrust is then held almost constant automatically. The uniformity of the plane’s acceleration confirms that something very close to uniform thrust has been set (F=Ma). After uniform thrust is reached, the increase in fuel flow indicates the increasing speed of the engine rotors, requiring more fuel as they draw in more air and deliver more power. Thus the eyewitness description of the sound appears to correspond with the recorded data.

One of the claims made by the flyover theorists is that the official story about AA77 is false as the FDR file appears to show the plane departing from the wrong gateway. However the positions recorded are derived from inertial devices which drift when the plane is on the ground. In the image below provided by John Farmer we see the plane apparently taking off over grass. 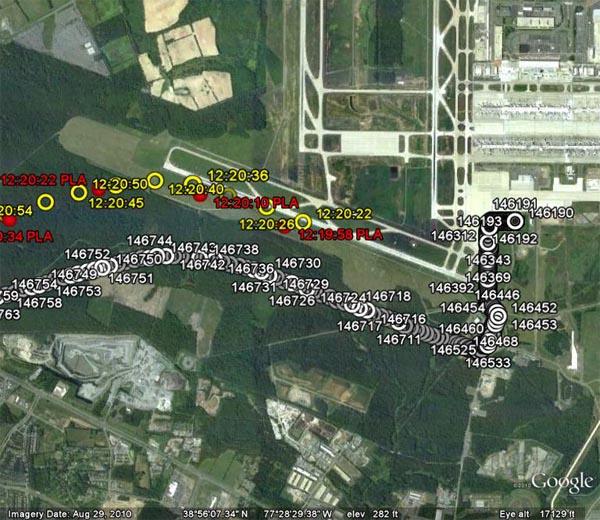 Radar and FDR data compared on take-off from Dulles

About two minutes after take-off we see the FDR converging with radar as the plane receives correcting signals from ground-based DME and VOR stations. 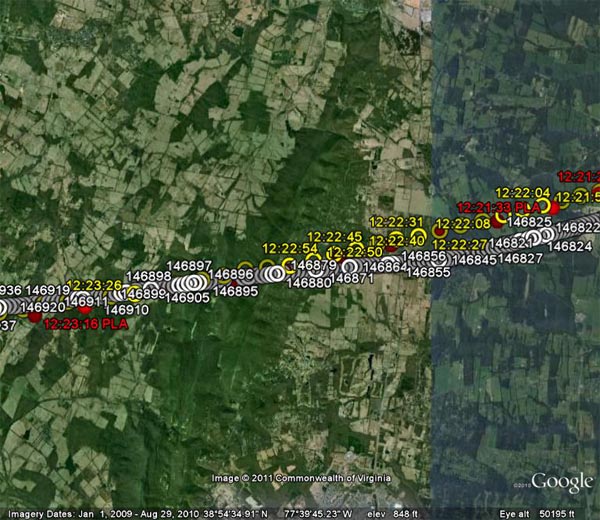 Clearly there is no case to be made that the FDR file can show from which gate the plane departed.