There are clues to the use of explosives in a great many photographs taken before, during and after the collapse of the towers. We will view some in that sequence. 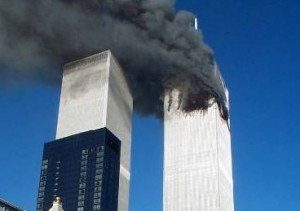 The official explanation for the collapses depends on very high temperatures being achieved by the steel columns. We see that there is much dark smoke indicating the fire is short of oxygen and therefore burning at a low temperature. The blackness of the smoke comes largely from particles of carbon, which burn to invisible carbon dioxide in a hot fire.

This appears to be visible confirmation of the observation in the NIST report that they were only able to find a very small number of pieces of steel which had been hotter than 250 deg C. This is very far from the 800 deg C that Bazant and Zhou had assumed in their paper and which NIST accepted. It appears they selected this temperature for no reason other than that the buildings did collapse and that would be a temperature hot enough to possibly cause some sort of collapse. It was not based on evidence. 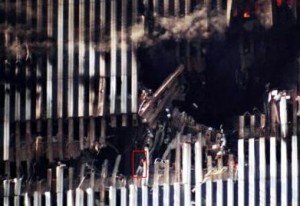 WTC 1, prior to collapse.

In this image of WTC 1 the presence of a woman in the opening shows that the temperature of the steel is apparently not too hot to lean on. This is the region of the building in which the collapse was supposed to initiate. We see some fires but hardly the widespread and intense fires needed to get all the columns up to collapse temperature simultaneously. If the columns do not come up to collapse temperature simultaneously the top of the building must lean and eventually topple over.

One can even conclude from this photo that most of the fire from the fuel and office materials has burned out by now in this region and that the steel there must be cooling. Steel regains strength as it cools hence collapse by fire must have become impossible. If contrary evidence is ignored a proper scientific explanation cannot be achieved. In this case, the evidence that the steel was not hot enough has been ignored. It is already apparent that the official explanation for the collapses has been proved wrong. 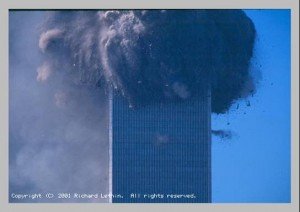 Dust puff far ahead of collapse.

Another significant observation from photographs is the presence of puffs of dust violently ejected below the collapse front. The official explanation for these is that the air was compressed by the falling top section, however there can be no intact surface in the falling debris to create compression, and certainly not so far below the collapsing region. This has been discussed by Kevin Ryan. A far more likely explanation is that the puffs result from mistimed explosives.

If the buildings fell due to gravity acting on weakened metal one would think that it would not send the perimeter columns flying out, yet that is what we see in the videos. 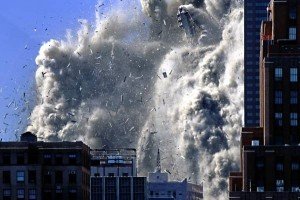 The horizontal reach of the debris is remarkable. If you right click this image and look carefully in the top right hand corner you will see a large section of wall columns leaving a trail of dust behind it. The direction of this dust indicates that the steel has been projected both outwards and upwards.

On the Home page are photos which show the enormous dust clouds which rolled out from the collapsing buildings, eventually settling inches deep over a wide area. The question asked there was: is this the concrete? There was of course a lot of concrete in the buildings, about 100 acres, 4 inches thick, in each tower, and it had to go somewhere, as very little can be found in photographs of the base of the towers after collapse. One has to ask why a building falling due to gravity would pulverize so much concrete so finely as to turn most of it into dust. The huge volume of dust produced would require energy input far greater than can could be provided by the gravitational collapse. 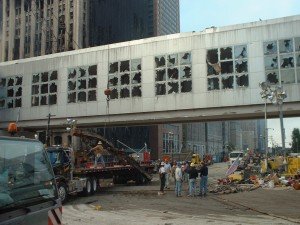 It didn’t all turn into dust however. Notice the jagged way in which these windows have been broken. This effect could not have been caused either by a blast of gas or a mass of powder. It could easily have been caused by a dense shower of projectiles. We can deduce that the concrete was broken into a range of sizes, the larger pieces doing the damage observed here to nearby buildings, while the smaller particles went further to form the gentler dust cloud.

There are also some powerful images on the WCT 7 page.