One of the characteristics of the 9/11 debate is that numerous websites have sprung up to defend the official story. No doubt some of these are paid for by the perpetrators but some will be from honest, agrieved citizens unable to grasp the painful fact that their leaders are capable of such infamy. Over time I will place here some of the discussion about the spurious claims found on these sites.

A claim that is widespread is that the red chips found in the WTC dust are primer paint. This idea was examined in the original paper, “Active Thermitic Material…“, and proof was given that they were not. A particularly compelling piece of evidence that the chips were not primer paint is found in the experiment carried out in the Differential Scanning Calorimetor. In this experiment a sample of the red chip material was heated slowly to 700 deg C. After the experiment, the material was found to have changed, some of it becoming mainly metallic iron. The surface of the iron tended to be spherical, showing that the iron had been molten. This is impossible at a temperature below 700 deg C, as iron melts at about 1500 deg C. The extra heat must have come from the reaction which changed the red material. This would be impossible for any primer paint, but is the expected outcome from the thermite reaction.

Prof. Neils Harrit has written a short paper showing proof that the red chips are not primer paint.

Molten steel or iron pours from the South Tower

A few minutes before the south Tower collapses we see that a small area of the tower is lit by bright white light. This is mentioned in the NIST report, where it is helpfully suggested that this may indicate that metal is burning. Anyone who has burned a strip of magnesium knows that it produces intense white light.

“NIST reported (NIST NCSTAR 1-5A) that just before 9:52 a.m., a bright spot appeared at the top of a window on the 80th floor of WTC 2, four windows removed from the east edge on the north face, followed by the flow of a glowing liquid.” 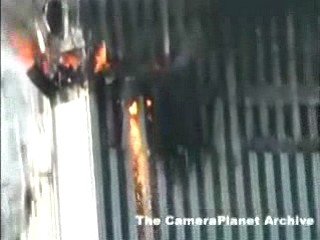 Then a stream of material is seen pouring from a nearby window. The colour of this material varies through red, orange and yellow and flashes of bright white are seen. There is general agreement that this is a stream of molten metal but there is dispute about the type of metal. Those who support the official story say that this metal must be aluminium from the plane or perhaps lead from a battery backup system. This cannot be true as these metals have very high reflectivity and low emissivity, so appear silvery in daylight when molten and we recall that 9/11 was a clear sunny day. In contrast, iron has high emissivity and low reflectivity so we can readily determine its temperature from its colour. When heated, iron glows bright yellow before it is hot enough to melt. What we are seeing here is molten iron or perhaps steel. As it falls it solidifies, cooling through orange to red. The occasional white flashes seem likely to be fragments of nanothermite reacting.

Apart from this argument, there is also the melting point to consider: both aluminium and lead would melt and flow away long before they were hot enough to glow at all. Have you ever seen solder glowing? If you wish to see either of these metals glowing, you will have to heat them far above their melting point in a container, then examine them in a dark room. If there is any sunlight about, all you will see is a shiny mirror surface.

More can be read here from Architects and Engineers for 9/11 Truth, and some handy figures can be found here at 9/11 Blogger.