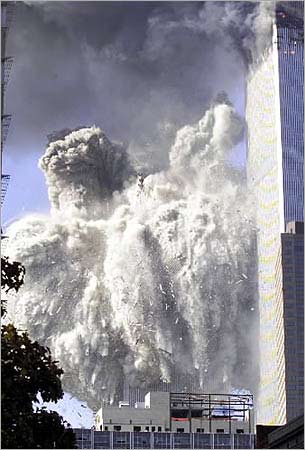 9/11 does not go away. It is with us on a daily basis. It has been the emotional rationale for a long list of radical changes in US policy, many of which continue with us even under the Obama administration:

If 9/11 “changed everything,” as George W. Bush said, then it is extremely important that we “get it right.” What really happened that day? The administration made a rush to judgement, immediately destroyed much of the evidence, stamped much of the remaining evidence “Secret,” and implied that critics were “with the terrorists.”

If all you know is what you have read in the papers or seen on the TV News, you are not fully informed, and you are quite possibly misinformed. We believe you have also been intentionally DIS-informed.

A “9/11 Truth Movement,” inspired initially by families of 9/11 victims, has amassed a significant amount of research that casts doubt on the official story line, but many people have never heard this or thought through the implications. The administration and the compliant media want this issue to go away, so any attempt to discuss or speak out on this issue is dismissed as a “conspiracy theory.” But keep in mind that even the official story of 9/11 is a rather bizarre “conspiracy theory.”  (Regarding the origin of that term, see Lance deHaven-Smith’s Conspiracy Theory in America.  In it he displays CIA document 1035-960 (see also here) which shows how the term was advocated to discredit those who questioned the Warren Commission report on the assassination of JFK.  The term has been used for similar propagandistic purposes ever since.)

[If you have inside information on what happened on 9/11, get a copy of the Whisteblower’s Handbook as a guide to how to get the information out while protecting yourself as well as possible, and visit http://nisterrors.com for assistance.]

In 2015 Architects and Engineers for 9/11 Truth published Beyond Misinformation, an excellent overview of the evidence for controlled demolition of the World Trade Center Towers 1, 2, and 7.  More recently (2016) Europhysics News has published “15 Years Later: On the Physics of High Rise Building Collapses,”  an overview article by Steven Jones, Robert Korol, Anthony Szamboti, and Ted Walter, giving this information wide circulation in the science community.
Linked Bibliography of 9/11 Scientific Source Materials

28 Academic Articles Critical of the Official Narrative of 9/11

Why I Am Convinced 9/11 Was an Inside Job by David Chandler
(mp3 Version: Recorded for KNFS low power radio in Visalia, CA)

Anyone who has presented the evidence that the World Trade Center was demolished with explosives has run into people with psychological barriers to even hearing the information.  Psychology professional Frances Shure has explored this subject in a series of essays, originally serialized in the Architects and Engineers for 9/11 Truth newsletter entitled Why Good People Become Silent — or Worse — About 9/11.  (There are 20 parts to the complete series.  A partial series is posted here for now and the others will be added as they are edited into this format.)

9/11…So What?  People want to know how they can respond once they have been made conscious of the truth of 9/11.  I get that question a lot.  Here are my thoughts on that subject.

25 Areas of Specific Concern in the NIST WTC Reports

The Missing Jolt: A Simple Refutation of the NIST-Bazant Collapse Hypothesis by Prof. Graeme MacQueen and Tony Szamboti, Journal of 9/11 Studies, Volume 24, January 2009

Chemical Evidence of Explosives in the WTC Dust:

Active Thermitic Material Discovered in Dust from the 9/11 World Trade Center Catastrophe
[This seminal paper has been unavailable recently at the Bentham Open Chemical Physics Journal web site. If you can’t find it at the Bentham site, try this alternative download link to a mirror copy. A copy is also available among the extra materials in the pdf folder on the 9/11 Analysis DVD.]

Brief video description of discovery of nanothermite by Steven Jones

Talk by Steven Jones about the nanothermite paper given at UC Davis, May 1, 2009

Presentation by Mark Basile about his confirming experiments with WTC dust.

The Top Ten Connections Between NIST and Nanothermites by Kevin Ryan

Analysis of the Structure of the Buildings at the WTC

Some Misunderstandings Related to WTC Collapse Analysis by Gregory Szuladzinski, Anthony Szamboti and Richard Johns
(That is a very conservative title.) This is a disproof of the official explanation for the collapse of the North Tower through mechanical analysis.  Published in the International Journal of Protective Structures.  Summary:  The energy absorbed by the buckling of the columns would have arrested the collapse within one, or at most two, stories of the onset of collapse.  This paper shows the Bazant papers (claiming once initiated, total collapse was inevitable) to have fatal flaws based on unrealistic assumptions.

1. Constant acceleration [which we see by direct measurement] shows that the average resistive force during the fall through the first story is equal to that which just barely allows the initial movement and thus precludes development of any significant velocity in a natural fall. Arrest should have occurred at the end of that one floor drop in a natural collapse. In fact, this is a serious problem for the official story since there is no natural way to generate a significant velocity in the first story due to heat weakening caused buckling.

2. Using actual velocity measurements, the kinetic energy available after the measured one floor drop is not sufficient to break through the lower floor’s columns. Bazant’s calculations show continued propagation only by assuming free fall generated velocity through the first story, nearly doubling the mass of the upper section, and underestimating lower section column strength by about 70%.

3. Even if somehow a significant velocity could be developed through the fall of the first story there is no deceleration during the collision between floors, which is necessary to generate the dynamic/amplified load to deform the columns and propagate through the next story down (which was capable of supporting several times the static load above it).

Up to this point Bazant has not been taken to task for the first and second issues, as earlier critiques had largely concentrated on the third. Bazant has been given a pass concerning the velocity developed during the first story fall to be at least what was measured, and although I had been complaining about Bazant’s extreme inflation of the kinetic energy available and underestimate of column strength, it hadn’t been explained well publicly.
Tony Szamboti

Open Letter to Bazant from Tony Szamboti on the errors in his analysis, requesting a response.

Misrepresentation of the WTC7 Structure by NIST

Letter by Attorney William Pepper to the Office of the Inspector General of the US Department of Commerce, which oversees NIST + A description of misrepresentations by NIST of the structures that are key to their proposed WTC 7 failure mechanism.
Tony Szamboti and others have been investigating the mechanism NIST asserts caused the collapse of WTC 7.  It has been discovered that in order to make their mechanism to work, they needed to deceptively alter their description of the construction details in several ways.  These differences show up when NIST’s description of their modeling is compared to recently released drawings of the actual structures.  The deception is central to an effort to challenge the NIST WTC 7 investigation on legal grounds as being evidence of an intentional coverup. Following the letter, in the same pdf file, is an extensive discussion of the key omissions.  This is an ongoing effort.

Modeling WTC 7
Architects and Engineers for 9/11 Truth has sponsored a major project to model the structure of WTC 7 as a check on the modeling done by NIST.  They contracted with Dr. Leroy Hulsey, a professor of structural engineering at the University of Alaska, along with two collaborators, an engineering post-doc and a PhD candidate, to construct two parallel computer models of the building and test its response to fire and other stresses that might account for its observed behavior on 9/11/2001.  The entire process is completely open and transparent.  The amount of detail presented might seem overwhelming to a casual audience, but it should provide a basis for confidence in the process and the results to anyone with technical competence who wishes to understand the issues in detail.

The September 2017 “final report” on the fire modeling and the hypothesis that fire caused the collapse.  Later there will be a second “final report” dealing with issues of progressive collapse.  Already this project has revealed that the NIST modeling was false and deceptive in many respects.  This video has been enhanced from the AE911Truth version in that the slides are full screen and highlighted with pointers that mimic the comments in the live presentation.

A Structural Reevaluation of the Collapse of World Trade Center 7 – Draft Report, September 2019

Request for Correction addressed to NIST

AE911Truth, together with 9/11 family members and a large group of individual architects and engineers submitted an official Request for Correction to NIST, requiring them to answer for some of the egregious flaws and deceptions embedded in the NIST WTC 7 report.  We have the full documents on the Scientists for 9/11 Truth web site.

Achimspok’s Channel /
——————-
[The videos below have occasionally disappeared from YouTube, although they appear to be available right now.  As backup, I found a copy of one of them here:
https://www.youtube.com/watch?v=1iQ3D9ZX8AI ]
——————-
UA175 –  the last 12 seconds; UA175 – the last 12 seconds – part2; The last 12 seconds of the alleged flight UA175 – refined (Achimspok’s analysis provides a 3-dimensional model of the final approach of UA175 to the South Tower consistent with all of the video footage, a direct measurement of the actual high speed of the plane, and reason to believe it was not being controlled manually.)

Incontrovertible / an excellent (British made) full-length, broad scope exploration of 9/11, related events, and implications.  Most non-technical overview films have mixed good evidence with weak evidence and/or speculation.  This one is solid.  It focuses on WTC 7, as evidence of demolition and insider involvement, but its overall scope is very broad.  Beautifully produced.

Calling Out Bravo 7 / excellent video, free of erroneous speculation, with a firefighter perspective

The Twin Towers’ Demolition: an Internet Slide Show from 9/11research.wtc.net

Propping Up the War on Terror:

September 11th And The Bush Administration

Interview with Emergency Coordinator, Barry Jennings : who was IN World Trade Center Building 7 when the first two towers came down

A New Standard for Deception A lecture by Kevin Ryan

9/11: Total Proof That Bombs Were Planted In The Buildings!
A collection of eyewitness evidence of multiple explosions and “secondary devices” planted in the building and exploding over an extended period of time. (I could do without the dramatic background music, but the eyewitness testimony speaks for itself.)

I (DC) started out doing measurements of the 9/11 videos using a tool called Physics Toolkit. More recently I have been using a much more capable and easy-to-use tool called Tracker, part of the Open Source Physics project.

Tracker allows you to mark multiple tracks with an unlimited number of points on a full-screen video, and it allows you to zoom in while placing the marks. No more magnifying glass to the screen! It also has a large collection of analysis tools. You need a little physics background to be able to use it intelligently, but no particular background to use the software.

There may be a bit of a learning curve but if you’re interested, give it a try.  Here is a brief tutorial. 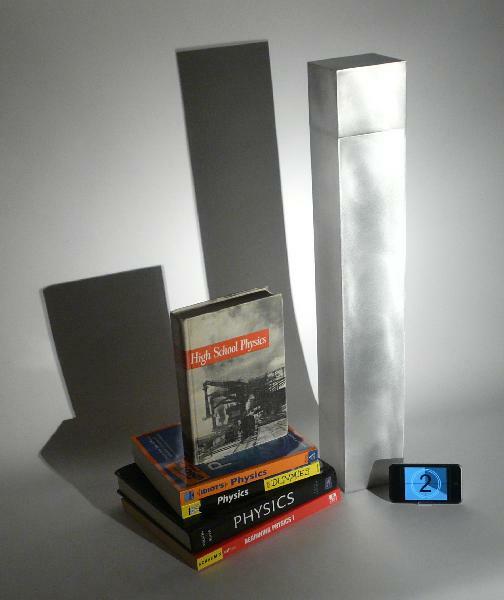 “I’m an artist and I made a piece of artwork called ‘The Split’ that was inspired in part by one of David Chandler’s early videos.”

On his website Mark writes:  “The title ‘The Split’ has a number of meanings here, but chiefly refers to a split with reality that occurred on that day.” (The blue Ipod screen with the “2” is running a countdown timer program.  I love the representation of Building 7 with an old high school physics text.)